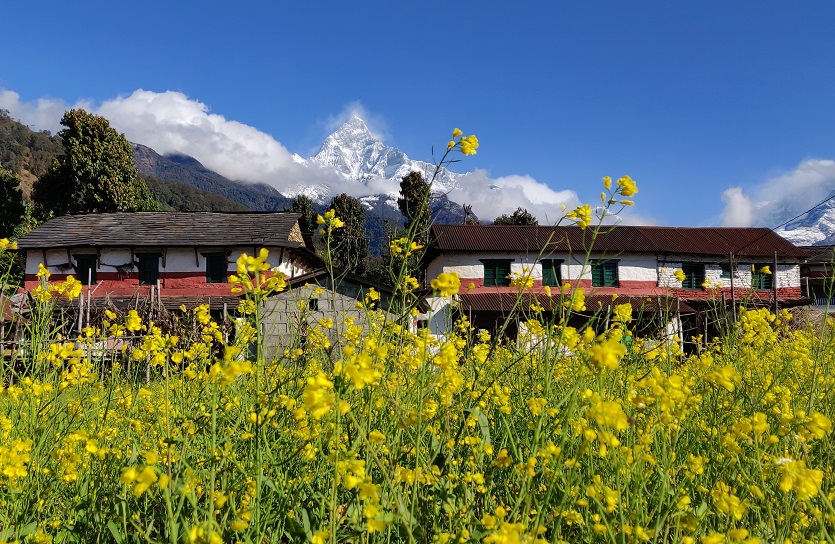 Ghachok village sprawls across a sloping plateau below Machapuchare – Fishtail Mountain – one of the most striking in Nepal. At the centre of the Annapurana range, the peak rises in a sharp triangle that has never been climbed, since a failed attempt in 1957 when it was declared sacred and out of bounds. The mountain stood like a shining guardian over much of my early childhood in the Gurung village that now falls just within the Annapurna Conservation Area Project.

When I was first carried there as a baby in 1969, there was no Project and no road. The walk took four hours and involved crossing the foaming Seti river on a swaying bridge made of three bamboo poles. I was under three when my Dad got me to walk the whole way, requiring multiple rests at tea shops and several extra hours. I don’t remember that occasion, but I do remember many later trips when he kept me and my older brother, Mark, going with stories: Aesop’s fables, Bible tales, the history of Nepal.

My parents were working in linguistics and literacy among the Gurungs, who are one of over 100 ethnic groups in Nepal and one of the four groups that can join the Gurkhas. Their language – which they call Tamukyui – is from the Tibeto-Burman family and had never been written down. My parents worked with them over the years to choose a script and to represent their language in it; the Gurungs chose Devanagari, used for Nepali and Hindi, because they learn it in school.

We lived in the village for several months at a stretch over a period of 9 years as my parents learned the language and culture, taking copious recordings and notes. Back then, there was no electricity and all water had to be carried on backs from a source higher up the plateau. We had the only kerosene pressure lamp in the community, which meant our home was packed every night with visitors eager to flick through the National Geographic magazines and the View Master slides. (Congratulations to anyone old enough to remember what that is!)

Our home was the middle floor of a house that the landlord had especially constructed to be high enough for my Dad, but like all village dwellings, had only wooden shutters and no glass in the windows. The buffalos and goats lived on the ground floor below us, while the rats had the penthouse, scuttling among the baskets of grains and corncobs under the slate roof. We had one room divided into sleeping and living areas by a sheet of orange hessian, with a half-panelled lean-to at the end that served as ‘office’. Our ‘bathroom’ was a round plastic basin and the ‘toilet’ was a pit in the neighbouring field, surrounded by bamboo matting. My father’s Time magazines were torn into squares for loo roll, though it was a bit too shiny for the job and made for a frustrating reading experience.

My mother home-schooled us at one end of the front verandah, while a growing number of village folk queued patiently at the other, waiting for her to tend their injuries and ailments. Watching her dispense pills in folded paper packets and daub Gentian Violet on cuts, I always assumed she was a nurse. It was years before I realised she was actually a teacher and relied on the legendary text Where There is No Doctor to help the community and keep us alive.

Like other village kids, Mark and I took a turn of perching on the high bamboo fences to scare off the monkeys from the crops and joined the procession to a central field for the slaughter and butchering of a buffalo. The meat was so tough that even pressure-cooking rendered it barely edible. Animals were everywhere, as was their life and death, their ritual sacrifice and place on the menu. I skipped across the stone-paved yard past flustered chickens who turned up in curry a few hours later, chopped into squares with feet and comb included. We always had a cat to ward off the rats, but my favourite animals were the baby goats, who had silky coats and velvet ears and never fought off my cuddles.

Our school lessons only lasted a few hours each morning and the rest of the time we were free to roam with our village friends. Playtime was often a blend of their games with our toys. Our parents were careful to keep our possessions minimal in the village, but Mark’s trainset was a great hit as was his wooden gun. Long and thrilling hunts ensued, where one kid was the deer and the rest of us galloped off past bamboo clumps and over stream beds in hot pursuit. The finale was to gather the dry stubble from the corn fields and build a small fire, pretending we were roasting and eating the venison.

My own treasure was my doll, whom I carried around on my back and laid in a bamboo basket like village babies. I’d slept in one myself, suspended from the rafters above my parents’ bed, where they could give me a swing if I cried in the night. Tragically, I left my doll in the ‘office’ one night and found her the next morning with half her face eaten away by rats. (Heaven knows what the cat was up to.) I was distraught, but loved her all the more fiercely, wrapping scarves over her head and keeping her close. Around that time, my mother taught us to knit and Mark and I produced a series of misshapen squares. Unbeknownst to me, Mum knitted some extras, sewed them together and backed them with flannelette to make a quilt for my doll. It was my Christmas present that year in the village, and though the doll has long since vanished (hopefully to a place without rats), I still have the blanket.

Now 82 and 79, my parents, are finishing up their work with the Gurung project, and when they said it would be their last trip to Nepal, I said I wanted to be there. Mark pitched in eagerly and so it was that last week, the four of us set off for Ghachok. Just before leaving home in Scotland, I pulled out my childhood photo album, snapped some pictures on my phone and tucked the blanket into my bag.

The story of what happened next is in the coming post. See you there!

2 thoughts on “Under Fishtail Mountain”