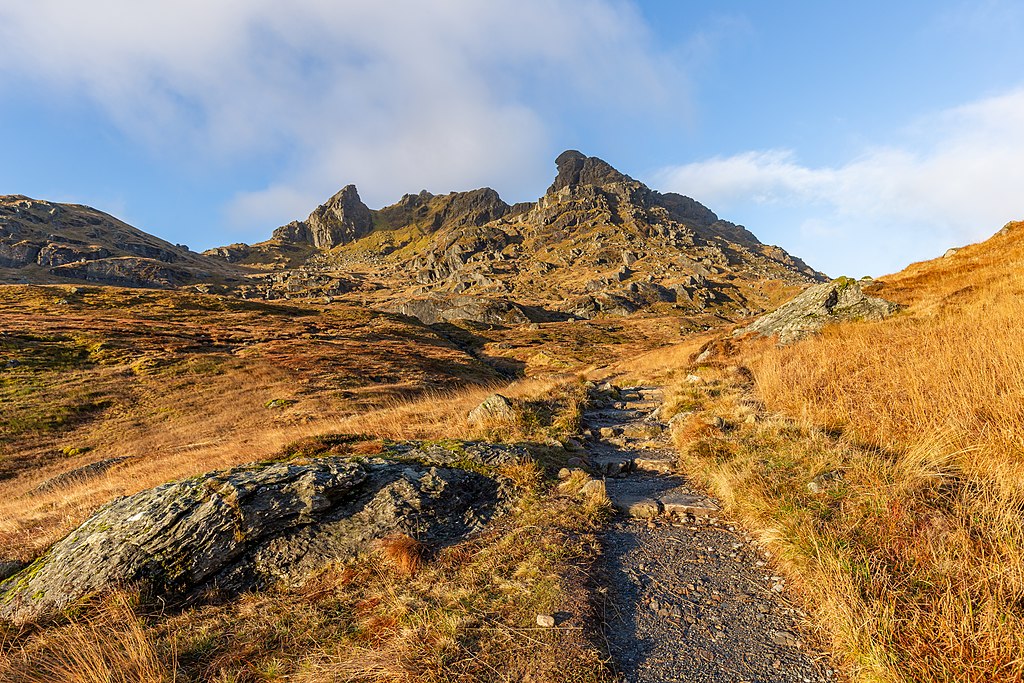 It started well. The party included my new husband, Alistair, and three friends, all experienced climbers. I was the only newbie but, hey, I’d grown up in the Himalayas, wasn’t afraid of heights and enjoyed a bit of light scrambling. I’d also recently finished a drama and dance teaching degree, so was fairly flexible and up for a bit of improvisation. The weather looked benign and though the climb they’d picked on the Cobbler – Recess Route – was graded ‘Very Difficult’, everyone was confident I’d be fine. Just fine. Flattered, I believed them. What could possibly go wrong?

I soon found out.

When we got to the crag and started roping up, the clouds began gathering and the views disappeared into fog. That was a disappointment, but not a disaster. Yet. Two of the friends set off together, spidering their way up a nearby route as the other three of us agreed that Al and Myles would take it in turns to lead while I stayed in the middle. It was a multi-pitch climb and I couldn’t see the top from where we stood, but what I could see appeared jolly enough and Myles scaled the first slab without a hair out of place.

I felt a little wobbly following him, but not too bad and I was pleased to reach the top of it. In the chimney that came next, though, I was fumbling to get a good hold and realised this climbing malarkey was trickier than it looked. The mist was now coiling up the hill and I could no longer see the ground. I fleetingly wondered if I could just drop down and maybe do a bit of scrambling instead, but an elaborate plan was underway and I didn’t want to spoil anything. The damp of the cloud began to settle on us, my fingers turning white, the rock turning wet.

At the end of that pitch we got to a tiny ledge and Myles started up the deep chimney round the corner. “Can I just stand at the edge here and watch what you do?” I asked.

Worryingly, he said no.

I sat down beside Al and listened to Myles huffing and puffing and swearing his way up. As the fog billowed around us, I wondered why on earth my nearest and dearest had chosen a climb labelled ‘Very Difficult’ for my first one? Why not ‘Easy’ or ‘Beginner’? I no longer felt flattered by their confidence; I felt betrayed. At another volley of curses from the bowels of the rock, I secretly pondered my chances of getting helicoptered off by Mountain Rescue. Clearly, they were nil.

Then Myles’ faux-cheerful voice sang out from the heavenlies, “False alarm! Perfectly fine!” I laughed. He didn’t detect the irony. Of course it was fine. Just fine.

I worked my way up through the drizzle, wedging myself against wet rock, clutching and clinging to slippery holds, and just managing to supress my own swearing, though not the rattling of my teeth. I was not afraid of heights; I was afraid of the ground, a long way down. On the final pitch I have an abiding memory of Alistair above me straddling the chock stone with both legs shaking. It’s what climbers affectionately call ‘disco leg’ but feels nothing like the joyous abandon of an 80s dance floor. If that was happening to him, what on earth awaited me? I quietly promised myself I would never do it again. At last, crawling over the top, I collapsed onto the grass.

“Did you enjoy that?” Myles asked eagerly.

Everyone, including my dear husband, stared at me in astonishment. “But you were laughing!”

“It was laugh or cry.” I’d known I couldn’t fall apart during the climb because that was only going to make it worse for everyone – including me – and there was no escape; no way out but up. I did laugh again, though, at the relief of being alive and the joy that it was over. Forever.

Later, over hot drinks and marital reconciliation back at the house, we read The Cobbler entry in Alistair’s copy of Classic Rock, and were stunned to notice the author had also taken ‘a young female eager to grasp the rock’. What a shame we hadn’t read this beforehand, as John MacKenzie explains that ‘if the cloud is down and wetness is in the air, it is just not worth it: schist is more like soap in those conditions.’ His companion was taken through a worse ordeal than mine with heavier rain ‘washing away her climbing career… In one day she had completed the process of initiation and enthusiasm, experience and caution, and finally the realization of terror, that mere climbers take forty years to undergo.’

I slurped my hot chocolate, feeling both profound sympathy with her and pride to have accomplished – and ended – an illustrious climbing career in an afternoon. I’m even more proud now I know Recess Route has been upgraded to Severe.

Since then Alistair and I have laughed over it and while I did try one or two other climbs, the thorough dousing of that first eager flame seems to have done it for me. Fortunately for us, we both still love mountains and walking and have continued to share that happier ground. But we learned our lesson and offer now our Seven Commandments For Converting Your Companion to Climbing otherwise known as The Cobbler Code, which can, in fact, be applied to just about any adventure sport.

Whatever happens, don’t let them feel a sense of failure if they don’t embrace climbing, and do forgive them if they burst into tears, shout or spit on your gear. This is probably your fault, not theirs. Though shared adventure sport can be a rewarding part of relationships, it’s not essential. I bailed out of climbing pretty quickly, but have been happily roped to Alistair for life.

This article was first published in the November issue of Scottish Mountaineer, re-posted with kind permission.

2 thoughts on “The Cobbler Code”