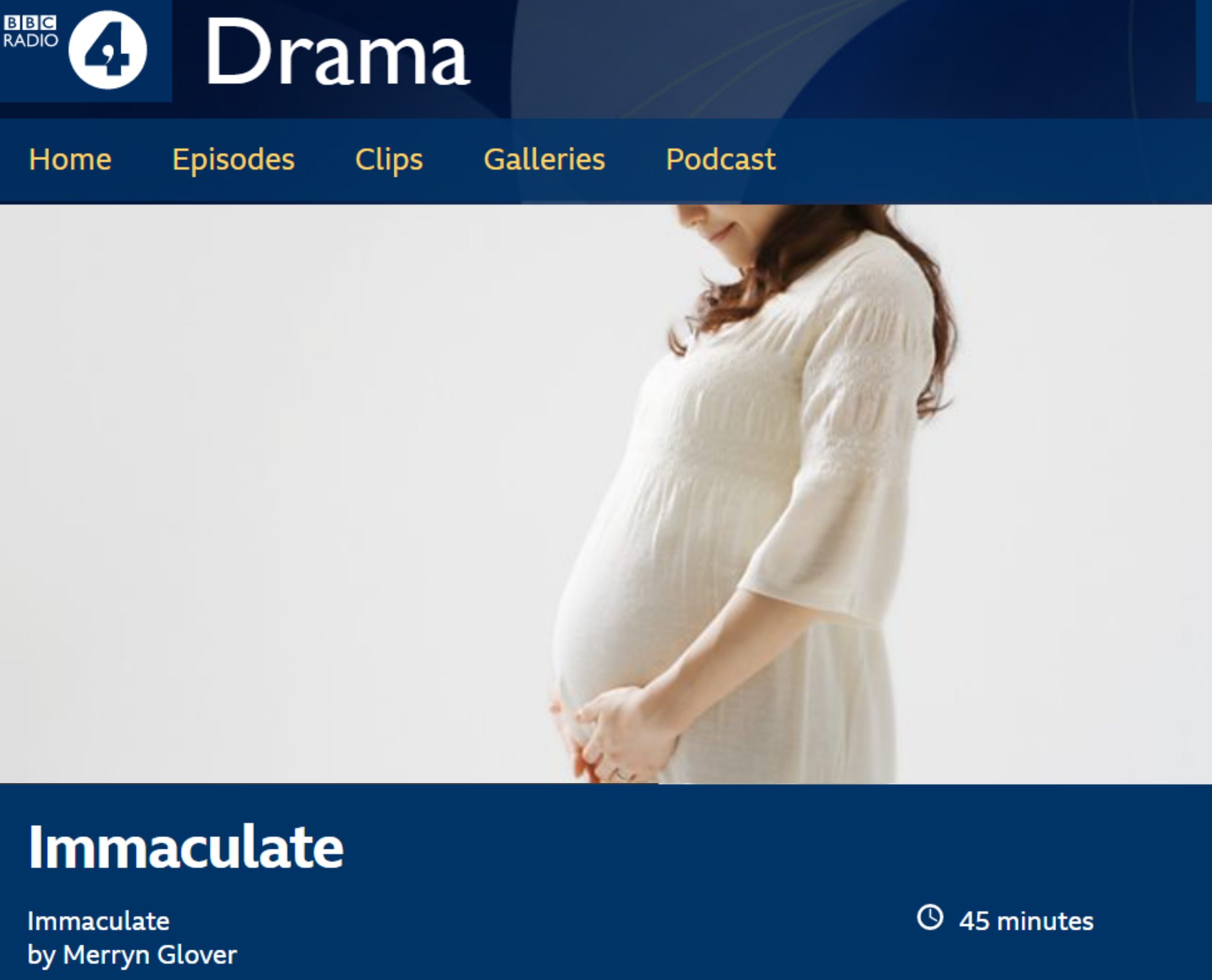 When Lily, a young girl from a troubled background, becomes pregnant, she insists she is still a virgin. A host of professionals swing into action. Lily becomes increasingly isolated: her belief is diagnosed as delusion, there are suspicions of abuse, and the unborn baby is shown to be severely disabled. But despite all of this, her conviction that God has chosen her for a miracle finds proof in the most unexpected ways.

That is the summary of my radio play, Immaculate, that was broadcast on BBC Radio 4 exactly ten years ago today. Featured in the Daily Telegraph’s Radio Choice, Gillian Reynolds’ summary concludes with: ‘hard choices and small miracles lie ahead.’ Seeing the anniversary turn up in my calendar brought back powerful memories and made me clamber up into the loft to find the box labelled Merryn Writing Archive, and dig out the Immaculate folder.

The work began with an intial idea in January 2010, of a girl with a miserable life who believes she has had an immaculate conception. Like the germ for Of Stone and Sky, it woke me in the middle of the night. That shows you the mysterious workings of the unconscious mind, or of the Great Spirit, or both. It also shows how long it can take to make a radio play – 20 months from conception to birth, pun intended. Of course, some plays take a lot longer or a lot less. I have ideas and entire scripts dating back many years that are sitting around un-used. So far. You never know when the time will be right.

But I sent that initial idea in a paragraph to David Ian Neville, radio drama producer at BBC Scotland who replied: “Happy New Year! Yes that’s an interesting idea. The question is what really happened to Lily? Do you have thoughts on that? Be interested to know more.”

So, actually, the work began much earlier, when I did David’s Radio Drama Lab in 2005, a highly successful collaboration between BBC Scotland and the Scottish Book Trust. Several years, ideas and scripts later, we made The Colour of Light together, broadcast on Radio Scotland in 2009. The story of a mother whose adult son cuts off contact, it recounts a heartbreaking experience that is much more common than we might realise.

But even that was not my first play, or even my first play on the radio. That was The Long Way Home, way back in ‘97 and ‘98 and it’s a whole story in itself, for another day.

Flipping back through the Immaculate folder now, I am reminded of how much ideas change and thankful for the rigorous process that hones them, though it’s very difficult at the time. At first, Lily lived on the 23rd floor of a tower block in Glasgow with a wastrel mother. But I couldn’t make this Morag woman work. I can see that my page of notes about her begins, ‘at the moment a bit of a female Rab C Nesbitt’. She didn’t make the cut. By the final version, Lily is living in a children’s home and though she talks to her mother, we never hear the conversation. Another cast-off was some guy called Peter. My notes about him begin ‘Who is he?’ and the page ends ‘Does it matter?’ Clearly, not enough.

As characters came and went and the story evolved, David pushed me on the question of what happened to Lily. What was the origin of this baby? Even if the mystery remained open for the listener, I needed to know or I couldn’t write her convincingly. I agreed. But did I know?

My process involved a constant shifting between paper and laptop, between writing scenes and copious notes to myself, between index cards to re-arrange elements and filling out tables with headings like What Happens and How it’s Told. The notes to self take all forms, from spider diagrams, to dense pages of writing, to flow charts. One such page is intriguingly headed: IF – there was sex with three columns: consensual, contractual and rape, with notes under each. The next page starts IF – there was no sex. Under that, one sentence: this becomes a slightly mythical story.

There’s always a lot of research for me. My folder includes an NSPCC calendar that was not just a source of information but a handy place to chart Lily’s pregnancy. There’s an NHS Scotland leaflet on medical confidentiality for under-16s and a training DVD on looked-after children. I have interview notes with social workers, foster parents, an adolescent psychiatrist, the police and a children’s home director. There are sheets labelled ‘voices’ that include phrases and pronunciation from different regions of Scotland including the 15-year-old girls from Kingussie High School where I was a supply teacher at the time. Back in 2011, apparently, they said things like ‘rad dude’ and ‘gnarly’.

From the beginning, David was both patient and persistent, always challenging me to draw out the best. He worked with me through the countless drafts, conversations, developments, synopses and treatments (seven versions) until Immaculate was ready for the hoops of the Radio 4 commissioning process. This involves a pre-offer stage followed by a full-offer round till, finally, the thrilling phone call that, yes, this play has been bought. (Believe me, I’ve had quite a few of the other kind of phone call.) There was still considerable work to do, though, and I ended up with ten drafts of the script. It’s painful, all that making things out of thin air and then having to take them apart and re-make them again. And again. And again. ‘The only kind of writing is rewriting,’ said Ernest Hemingway.

At last, by late June 2011 it was time to stop re-writing and start recording. Although this was a Scottish play, it couldn’t fit into the Glasgow studio schedule, so we were booked for Maida Vale. I hopped on the train in the Highlands and can still remember gazing in wonder as the spires of Edinburgh, Newcastle and Durham slipped past and thinking to myself: here I am, heading to London to make an Afternoon Play for BBC Radio 4! What’s more, they’re putting me up in a hotel! I felt I had arrived.

The next morning in the studio, David had assembled a rare cast that included Jenny Lee and Ken Drury as kindly Street Angels and Ali Craig as Lily’s boyfriend. Jane Whittenshaw, who played Lily’s Care Home manager, did the first read-through in a flawless Glaswegian accent, but when David asked her to go Geordie instead, to distinguish from other characters, she pulled that off without batting an eyelid. ‘My main memory of Immaculate,’ she told me yesterday, ‘is the extraordinary story.’ We also had Cathleen McCarron as Lily’s GP, who said, ‘I remember David constantly trying to get me to be more “doctor-ish” because I was way too invested in Lily and rather lacking in professional detachment!’ What I remember is Cathleen sidling up to me on the second day to ask what really happened to Lily.  I think I mumbled something about mystery.

The most demanding role, of course, was the central character of 15-year-old Lily, herself, that was brought to life with exceptional sensitivity by Helen Mackay. On broadcast, Immaculate featured as Paul Donovan’s Pick of the Day in The Sunday Times Culture section, where he wrote, ‘Merryn Glover’s wonderful drama comes from Scotland – where Roman Catholicism has twice the following it enjoys in England and Wales – but does not rely on doctrine or delusion. To say more would be to spoil it. Outstandingly well acted, particularly by Mackay, who comes from Thurso and is a rising star.’

Helen, who did much of her early training through Eden Court in Inverness, remembers the experience well. ‘It was my first ever radio play and it really opened the door for me to lots more opportunities. Playing a character like Lily comes with great responsibility but it was written so truthfully and with such heart that it made my job so easy in a way. I remember auditioning for the part and thinking I have to play this role.’ She was absolutely right.

The legendary old Maida Vale studios have hosted musical legends from the Beatles to Adele to the BBC Symphony Orchestra. I always knew music would be important for Immaculate, but it took me a while to find the right sound. A list of Motown songs reveals an early tangent. Then at some point I remembered a folk song I loved called The Great Storm is Over which I first discovered when the Fiddle Puppet Dancers came to Celtic Connections in the mid ‘90s. Originally by Bob Franke, it was written when his daughter was diagnosed with an orthopedic condition, and the tune and lyrics for ‘the little lame child’ were perfect for Immaculate. Getting permissions proved challenging, however, so David brought in musician Megg Nicol to record it in studio, which was utterly beautiful. Finally, Helen singing the last chorus gave us the heart-stopping close to the play.

John Bungey of The Times said, ‘there are shafts of light in Merryn Glover’s touching drama’. The voices of each of these talented performers were undoubtedly some of them. And there were the invisible shafts, too, the production assistant, Sue Meek, and the sound wizards, Roger Danes, Marc Wilcox and Jill Abrams, who quitely wove the whole thing together. And David, from first idea to final edit, the midwife. For each play I have written, I have found it the most moving thing that all these people come together in a room to bring my words to life; to put flesh on bones; to animate the vision. Writing can be solitary, but play-making is always community.

Three months after recording, our family set off for a seven-month sabbatical, and so it happened that by the time of broadcast on the 2nd of November, we were in Kathmandu. A group of friends came round and we sat in the evening shadows of the living room to listen, the recording punctuated by the occasional bark of a dog or roar of a motorbike or ringing of a temple bell. But it transported us back to the living rooms and streets of Scotland where a young woman believed, against all odds, that she was chosen for something sacred.

Jane Anderson of the Radio Times said, ‘It is a profoundly uplifting story… It is Lily’s pure, unselfish love for her baby that brings a shine to these otherwise dark proceedings.’

But the question remains. What really happened to Lily?

You can listen to Immaculate on Audible.

2 thoughts on “Immaculate – The Birthing of a Radio Play”