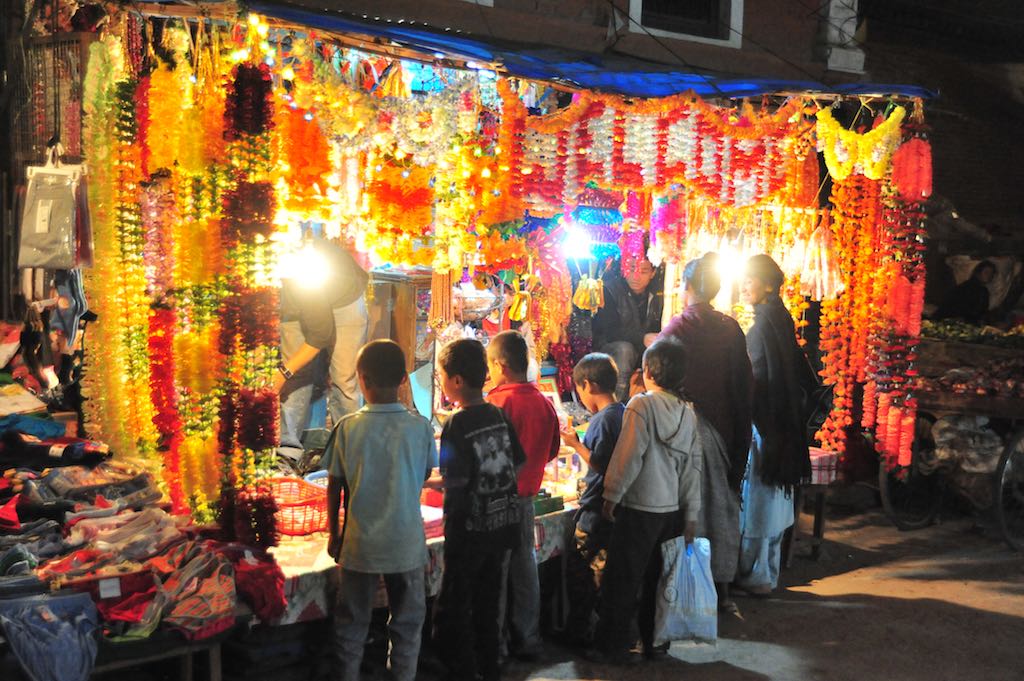 Millions of people around the world are celebrating Diwali, the Festival of Light, and it always takes me back to South Asia where I was born and brought up. I returned to work in Nepal with my husband in the late 90s and early 2000s and here is a memory from exactly 20 years ago, first published in the Guardian Weekly. Most of the photos in this post are by kind courtesy of Rowan Butler, whose work can be seen on his site Yaksnap.

This is Bhai Tika, the day for worshipping brothers. My own brother, unworshipped, is sprawled on the grass watching his son and mine at play. It is a late autumn evening in Kathmandu, and the air is whispering of snow. The poplars shiver, casting a handful of leaves to the wind.

My niece charges past and shouts, pointing to the north. There – above the valley of houses, above the eyes of Swayambunath temple, above the wooded hills and a parting drift of cloud – are the mountains. They are shining, white and gold and unearthly as if a veil had just been lifted on the plains of heaven.

Bhai Tika is the last day of Tihar, the Nepali festival of light. In India they call it Diwali, and it is one of the most important events in the Hindu calendar. It celebrates the myth of Rama who rescued his wife Sita from the demon king Ravana. When they returned triumphant to their own city of Ayodhya, the people of the city welcomed them with thousands of oil lamps.

So today, Hindus light up their homes, don new clothes and gather with loved ones for days of feasting and ceremony. In Nepal, the emphasis is on the goddess Laxmi. She is the goddess of luck and wealth, her curvaceous form swathed in a bright sari, gold coins pouring from her palms. In one of the poorest countries of the world, maintaining good relations with Laxmi is vital, and her image adorns nearly every home.

In the classically Hindu spirit of all-embracing devotion, worship at Tihar is offered not only to the goddess of wealth, and one’s brothers, but also to crows, cows and the humble dog. The devout leave out offerings of sweets and rice in woven leaf plates for their animal friends, and many a flea-bitten street mongrel can be seen sporting a garland of marigolds and a red splash of powder on its forehead.

It is a time of riotous celebration, with fireworks exploding through the streets, and bands of musicians playing wild tunes. Bedraggled school-children go door to door with a drum and a limited repertoire of songs that they shout, rather than sing, until you pay them to go.

In a recent trend reflecting the rise in western influence here, some of the wealthier teenagers assemble rock bands on the backs of trucks and regale their neighbours with the very latest in Nepali, Hindi and American pop.

This usually decorous society loses its head a bit, as men drink and gamble, and young folk carouse in the streets and throw loud parties. There is, inevitably, excess and brawling, so my doctor husband works nights in the hospital emergency department to patch up the casualties.

But this is a beautiful season. A month after monsoon, the skies are washed clean, the rice has been harvested and the great Himals appear for lingering moments at the rim of the valley. They are like queens emerging on balconies to gaze briefly down on their subjects before gliding back behind curtains of cloud, as if they believed we could not bear the force of their beauty for any longer.

Here in the valley, young boys fly colourful paper kites from roof tops, as women can be seen picking their way gracefully across muddy streets in saris of vermillion, turqouise and parrot green. Scarlet poinsettias splay out against the sky, bougainvillaeas hang heavy with bunches of deep pink, while trumpet lilies echo the white of the distant snows. Everywhere are the brilliant marigolds: in garden beds, balcony flower pots and in garlands draped above doors and around the necks of dogs and brothers.

Tonight, I bid farewell to my brother and his family and take my son home in his pushchair, bumping and bouncing over the ruts. Darkness is gathering softly and the night smells of firecrackers and smoke. A couple of dogs trot beside us as we pass houses where lights are winking on. We turn in at our gate, stepping around the mandala – the geometric design drawn in powder on the ground. From it, a line of red mud leads towards the landlord’s door. The way is lit by flickering oil lamps. It is all to entice Laxmi to visit and bestow prosperity.

The landlord and his sister meet us at our door with warm greetings and a plate of food – lentil cakes and hard-boiled eggs rolled in spicy sauce. I carry these into the kitchen where the curtains are billowing with the cool breeze. My son pulls closer into my arms. I don’t know where Laxmi is tonight, but beauty has swept in and poured her gifts at my feet.